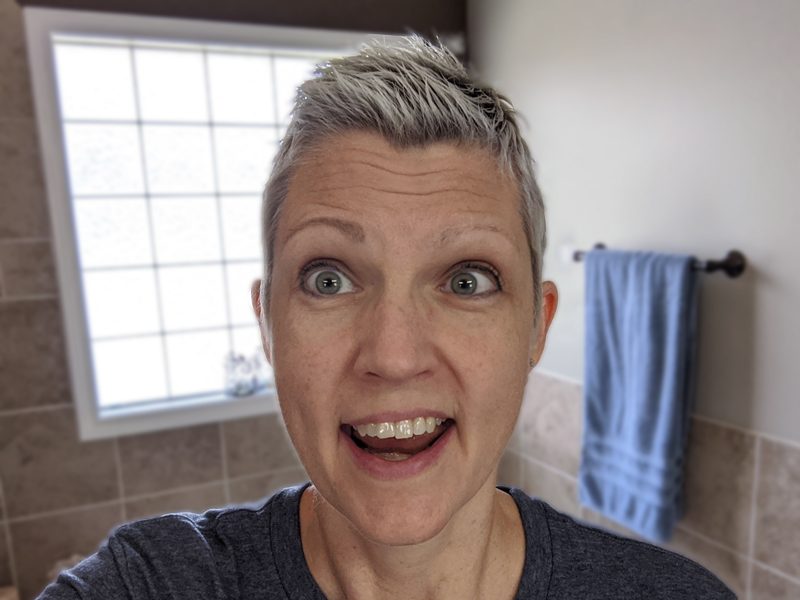 I had read in my breast cancer support Facebook group that other women who were doing the antibody infusions had their eyebrows disappear two or three times before they were done, so it wasn’t a surprise when I started noticing that mine seem to be departing for a second time. Thank goodness I’ve gotten fairly adept at the eyebrow pencil! They still don’t always match exactly, but at least you can see them!

We finished up the headboard over the weekend, and I love how it turned out!! The lights look fantastic, and I found some fun things to put on the shelf at Hobby Lobby:

Today I started on the toilet room in the master bath. The goal is to put the same tongue & groove white planks behind the toilet, and paint it the same “Passive” gray from Sherwin Williams. First I had to take down the wallpaper border:

The top layer is a vinyl and came off pretty easily. Then I had to go back with a wet sponge and soak the paper layer that was still stuck to the wall and scrape it off. Wasn’t too difficult! I put a layer of primer in the corners. Kent is going to pull the toilet to put in the planks, and he’s been wanting an elongated bowl in our bathroom for the past (almost) 20 years, so that’s finally going to happen. Last night the shut-off valve started making weird noises, so apparently it’s getting tired and ready to be replaced as well!

My sleep situation has definitely improved and I was able to get a couple of 10-hour nights in a row. I’m sure it helps to have our bed put back together and the big jobs done. I have some more fun projects that are a little bit smaller. I’ll keep you posted on those!

Meanwhile, my heart is definitely heavy for the family at our high school whose son committed suicide last night. He was one of Kylie’s classmates. They went to elementary school together and he was also a band kid. We worked with his dad quite a bit last year during the competitive season last fall. Praying that the Lord would surround the family with His love and they would feel His compassion toward them.

by Amy Warden
No Comments