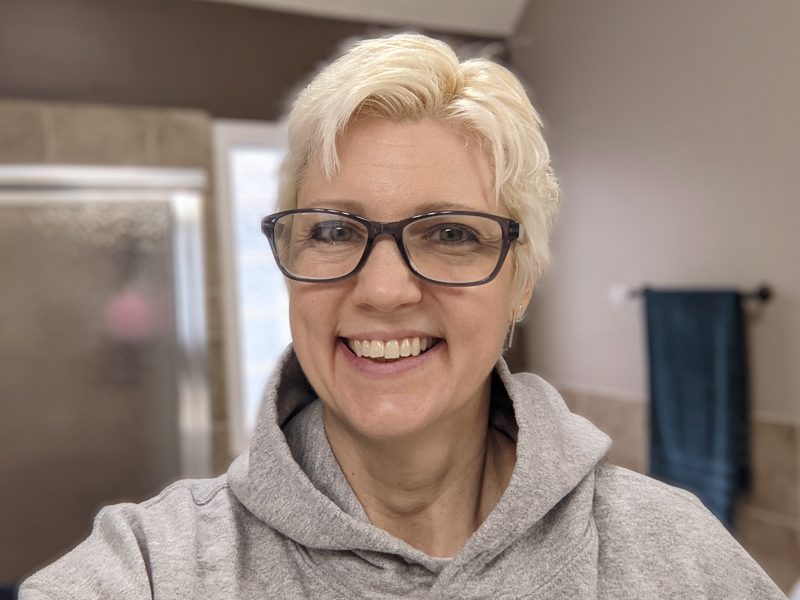 Today was the first time to get more saline added to my tissue expander. I’m guessing it will take two more injections two weeks apart, and then the four-week rest before the next surgery to put the implant back in. But I’m getting ahead of myself…

I’ve been doing stretching exercises to get the range of motion back in my right arm – the same ones I did after the mastectomies. The skin and muscles aren’t quite as tight this time, but they definitely need to be stretched! You might recall that I’ve been doing stretches on my left shoulder for adhesive capsulitis (aka frozen shoulder) since December. I’ve made a lot of progress, and have better range of motion on my left side than my right now. Every time I have a surgery, I have to take a break though, so it feels good to get back to it!

Three nights ago after doing my exercises, I noticed some redness and tightness around the tissue expander. It felt familiar – like when it was infected! I went to bed and started thinking about all the potential scenarios that could possibly happen if the infection was actually coming back. I counted down the days since I finished up my antibiotic and it was exactly two weeks – the same amount of time that it took for it to come back before the implant was removed. And then I stopped myself. This was the first test since the Lord spoke to me about that moment in time that He had prepared for me – the one that felt like I was alone in the night as a child, but it was all part of His plan. His perfect plan!! So I told Him no matter what this looked like, I would trust that His way is best. And then I went to sleep!!!

The next day I pretty much forgotten about my symptoms until that evening when it seemed like they were flaring up again. I decided to call Dr. Storm’s office the next morning (which was yesterday), because I knew I had my appointment coming up to get the tissue expander expanded today. The nurse called me back and said if I wasn’t too uncomfortable I could just wait until my appointment and see what Dr. Storm thinks rather than calling in an antibiotic. I was all for that! I went to church last night and the other volunteers and Student pastors prayed over me that the infection would not take hold.

This morning the redness and tightness was much less when I went to my appointment. Dr. Storm said everything was still healing and he was unconcerned. He injected another 75 cc’s of saline in my implant and we set an appointment for the next injection in two weeks. I’m right on schedule and God is so good!! Thanks so much for praying for my continued healing!