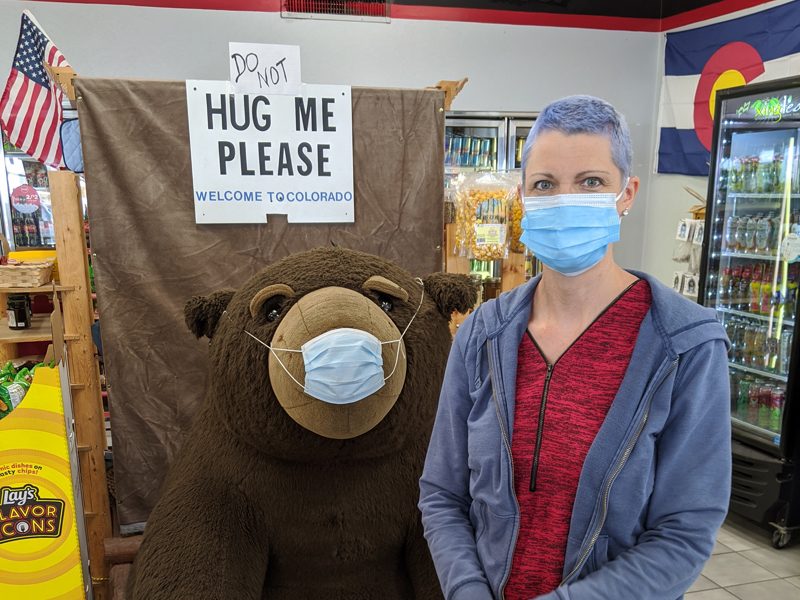 It had been two years since we had taken a vacation, and we had been planning this one for several months. Not that we really needed an excuse to take a vacation, but it worked out so that we celebrated Kent’s 50th birthday and our 22nd wedding anniversary! Many places were closed due to COVID, but we found plenty of things to do around the area where we booked our condo in Dillon. The altitude in Dillon is 9100 feet, and I figured I hadn’t been that high up since I worked at a camp outside Estes Park 26 years ago! I felt it more than I wanted to, but still had a really great time!

The first day, we decided to go for a hike near Silverthorne. The trailhead was actually inside a residential area, and it was a four-mile loop. It started out nice and cool in the morning – not only because of the temps, but much of the trail was shaded as well:

About half way along, the trees started thinning out, the air was getting warmer, and there was a nice creek running through the area:

It was a slow climb, higher and higher, then we came back down pretty quickly, and found ourselves coming out in the open. We should have known by then that we might have missed a turn somewhere, because it didn’t look like we were getting anywhere near our car:

By the time we found the trailhead for this path, we knew we weren’t going to make it back to the car any time soon! We called an Uber, and $13 and a nine-minute drive later, we finally made it back!! We honestly have no idea how far we actually hiked because we didn’t have cell service for part of the time, and neither of us have fitbits.

The next day was Kent’s birthday! We got all-day passes at Copper Mountain to do all the fun summer activities that they had available which included unlimited ski lift rides, two alpine coaster rides, and a bumper boat ride. As we went up the lift, we could see ski jumpers having lessons toward the top! I wasn’t fast enough to get videos of them, but several were quite impressive! We also enjoyed the alpine coaster – quite fast coming down and some excellent hairpin turns!

Saturday was our anniversary, and we traveled just a bit farther to Vail to check out the Betty Ford Alpine Gardens. Kent brought the “good camera” to take some photos. These are some of my favorites:

We found a local franchise called Yellowbelly for lunch. Kent asked if I wanted to bless the meal, and I started but couldn’t finish. I was just so overwhelmed by all the Lord has brought us through, grateful for our 22 years together, and how much He has blessed us!

After lunch we decided to drive around a bit to find some more scenic places. It got arid rather quickly the farther west we went! The next town over from Vail was Minturn, and we stopped at the old railroad tracks and found graffiti from the day before! I made Kent stand next to it to commemorate his 50th birthday.

After being out in the sun, I was starting to feel the effects! Fortunately, I had brought some coconut water along, as well as Reliv (thanks, Mom!), and after about an hour I started feeling a bit better. Kent’s goal was to find a place to take photos by the river running by the interstate. It took awhile to find an accessible spot, but we finally found one near Wolcott.

We drove back to Dillon to get cleaned up and ready to go out for our anniversary dinner at the Keystone resort. It was a delicious meal at Zuma Roadhouse!

This was our last night in Colorado, and we both had such a difficult time sleeping! We’d kept the windows open each night since there wasn’t any air conditioning. The mornings were quite cool – usually around 50 degrees. The air quality has been pretty bad with all the wildfires, but we never did smell smoke. We just weren’t used to the changes in temperature, dry air, and higher altitudes!

It took us 11 hours to drive home yesterday. We were both super tired by then, but so thankful to sleep in our own bed! I only got up once in the night and I slept until 9:30 this morning without any hot flashes (that I recall). Now I have six custom batches of soap to make in the next few weeks from five different customers – one is an order of 100! We’re also wrapping up the August soap challenge, so I’m checking entries, as well as getting challenges lined up for the rest of the year to be announced on Sunday! I had another acupuncture appointment this morning, and still believe that it is helping. Thanks for the continued prayers – and making it through this incredibly long post!

Grieving With My Cousin