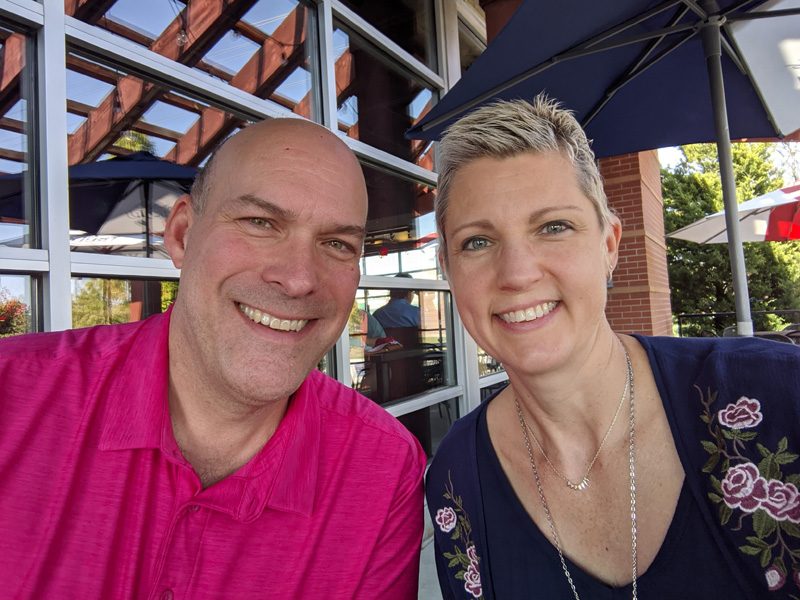 It’s been a really great week for a birthday! (I turned 47 on Wednesday.) The weather has been unusually warm and sunny all week which has been wonderful! On Tuesday I got to have a birthday lunch with friends I haven’t seen in person for many months!! I meet with these two via zoom for prayer every week, which works out pretty well now that one of them lives in Texas. We’ve been meeting every week for several years and have been through so much together, so it was a very special treat to see them!

On my actual birthday, Kent took me to Red Robin for lunch and we had the patio all to ourselves (photo above). That night I went to our student ministry like I do every Wednesday night and the volunteer leaders that I help organize, plus the staff, had signed a card for me that was very sweet. Additionally, the wonderful Facebook messages I received throughout the day and beyond were all most appreciated! I’m always humbled to hear from those who are still praying for me!

Kylie went back to in-person classes on Wednesday as well. Our school district is doing a hybrid model where last names starting with A-L go for two days, then M-Z go for two days… It’s making things a little difficult for the music classes as it doesn’t split them up by instruments or vocal range very evenly! Definitely better than staying home all day though.

I was hoping that Tara would try to surprise me by showing up over the weekend, but I also didn’t want to get my expectations too high. Friday night Kent and I were coming back inside after sitting out on the patio and I heard someone come in. I thought it was Kylie coming home from work, but then I heard a male voice as well, and I knew it was Tara and her boyfriend Ty!!! I was absolutely elated!!

Kent was the only one in on the surprise, and he was happy to have them here too – partly because he had some extra help with the siding on Saturday!

We all went to church together Saturday evening and we were hoping to have my belated birthday dinner at Cheesecake Factory since I had a really nice gift card from a friend. Unfortunately, the wait time was going to be two hours and it was already after 6pm, so we decided to try Chili’s instead which ended up being a great choice! We even attempted to order cheesecake to go from my phone but it wouldn’t take the gift card, so we got a cheesecake sampler at Sam’s on the way home instead. I had made myself a gluten free, dairy free chocolate cake since I couldn’t eat cheesecake, and we all had our yummy desserts!

I am happy to report that I haven’t had any more itchy nights! I’ve been taking the mushroom supplement that someone recommended for nerve support, and I haven’t been as itchy, but so far I can’t tell it’s actually working on the neuropathy in my feet. My left foot especially is buzzy almost all the time.

I’ve also had some issues with my left shoulder that are unrelated to chemo/cancer as far as I know. I had injured it back in 2013 doing a team building exercise where my teammates had to pull me up and over a wall by my arms, and I felt like I re-injured it after doing shoulder presses with 10-lb hand weights (so maybe it is chemo/cancer related because I used to do those all the time before!). I finally remembered to tell my chiropractor this week and he discovered that my clavicle was out on the left side, and proceeded to put it back. Oh. My. Goodness. That hurt way worse than the occasional pain I was having from putting my arm in certain positions. My chiropractor let me use his ice pack for a few minutes before I left, and he told me not to put my arm straight over my head (i.e. like a shoulder press!) for awhile. I’m still not sure it’s totally fixed, but it’s definitely better…

My First Side Effect