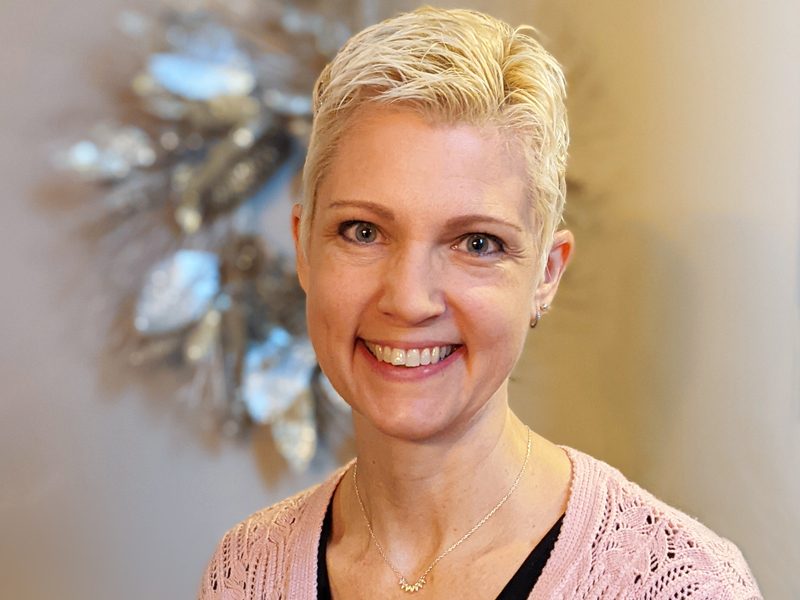 I had Kent take this photo of me today for a soap magazine article that is coming up in March about women in business. It’s in the same spot where I took the photo for this blog just over a year ago, with the same Christmas wreath behind me!

About the cellulitis: I still have another two weeks of antibiotics left to take in my 6-week course. I had been noticing that my right side feels a bit tighter than the left when I’m doing my physical therapy exercises for my frozen shoulder, and the skin is still just a little more pink than the left side. Monday morning I called the plastic surgeon’s office to see what they recommended. Dr. Storm ordered a breast ultrasound to check for fluid around the implant and if fluid was found, they were to aspirate and culture it. I had the ultrasound today, and NO fluid was found. Just some fat necrosis, otherwise known as scar tissue from the mastectomy. I got to see Dr. Massengale, the radiologist who gave me my initial cancer diagnosis just over a year ago, and she said, “Promise me you won’t lose sleep over this! It’s nothing to worry about!” She recommended finishing my antibiotics and a follow-up ultrasound in six months. I have a follow-up appointment with Dr. Storm on Thursday to see what he recommends as well.

Meanwhile, I will try to sleep just as well as I normally do – that’s sort of a joke…the hormone blocker makes me tired but not sleepy. I have to take a melatonin every night to get to sleep. Since I was curious how much sleep I actually get, I got myself a cheap “fitness tracker” watch that monitors my sleep, steps, heart rate, etc. It says I average 2.5 hours of deep sleep and 6.5 hours of light sleep most nights. Although the first day I wore it, it started tracking my “light sleep” around 6:40 when I was watching TV. Kent says I get what I paid for!

I also found out that the hormone blocker can cause flu-like symptoms the day after I over exert myself. I’ve had a fair number of headaches, body aches, even chills the past few weeks. Sunday was the worst. Kent wasn’t feeling that great either, so we spent a lot of time on the couch – watching the Chiefs barely squeak out a win, and the movie Tenet that I got him for Christmas. Then yesterday, we were both feeling better again! It wasn’t until today when I was reading posts in the breast cancer Facebook group that I found out these symptoms are a side effect of the Letrozole. (Not sure what Kent’s issue was – just tired, I guess!)

Other than these strange side effects, I feel like I’m doing pretty well! I’ve been faithfully doing my PT exercises at least twice a day and already seeing a bit of more range of motion in my shoulder. Tomorrow I get to have a massage and my last physical therapy appointment – at least for now. I’ll have the option to go back again in January, but I’ll be starting over with a new deductible… I’ve been working on the tutorial for the January soap challenge, and trying not to over exert myself! Grateful to be where I am, and able to do what I love!

I Joined a Board of Directors